If someone can figure out how it would be useful to the DMI, I would be willing to build it.

The only thing I can think of is that it would unlock certain areas of the map for you. Sadly, you can't buy new, useful things for your classes unless you wanted to limit the amount of humans to 18 players at a time (AI can always just be locals).

If I did make some type of inventory system, it would be savable. If the server was restarted, you would have everything you had beforehand. It would be based on player name (or player name + ingame keypad code).
Top

*Economy is all about allocating our scarce resources to those who demand it the most (signified by the willingness to pay). On earth there are scarce resources, but in a video game there is not. We can just spawn 32 cars out of thin air with no cost. Now yes there is a certain limit on memory, but I don't envision a massive crowd online at the same time. To tell if making this system is worth it, we must ask, what resource(s) needs to be allocated and to whom?

A money system parallels the ranking system that was proposed. Both rely on some positive source of income for either experience points or dollars. An example of an existing system in practice right now is Combat Arms. It features exp and gp (experience points and money). You earn both from fighting in battles. You can spend gp on weapons which disappear after a certain amount of time (usually 1 day). Exp never goes away and goes towards your ranking up. There are certain servers you can only get into if you are a certain rank as well.

Does this CA system work effectively at allocating resources to the right people? In theory, it should mean that the more experienced players are able to buy better weapons and go into non-nooby areas. But in reality, it is not a matter of experience more than it is the amount you play. CA will give you exp and gp even if you do very little on the battlefield, meaning even the lousiest players can rank up if they just play a lot.

Overall this does not matter to the makers of CA. Their primary goal is to get people hooked on playing their game. A tiered ranking system and cool unlockable weapons just serve as incentives for playing more and more. The primary word is incentive-- something that induces a person to act. There is no point to creating an economic system without incentives.

*To say all of the above in one sentence: we need to create a system of good incentives and income that allocates resources to the right people.

Resources/Incentives to be allocated
Like you said, restricting certain areas is a possibility. Take for an example, an "elite members only" bar. Only the best could get in, making other people want to work to get in as well.
Vehicles could certainly be allocated as well, I'm pretty sure some sort of dispensing system could be created so that you pay a certain amount of money and you are given access to a vehicle. Vehicles created with CreateEntity have messed up weapons, if we can't use this we can perhaps just have an unlockable room that has a vehicle spawn in it.
An inventory system like you said seems impractical due to class restrictions.
Perhaps a jukebox could be made so you have to pay a certain amount of money to hear a song.

To whom
We could follow in the lines of CA and reward points to people who play the game more. Probably also more of an emphasis on activities done as well. Ultimately I'd like to not just reward people that play a lot, but are also good people who follow the rules etc. It's kind of tough to think about this when it ties into a bunch of other factors such as how the policing is going to work, what exactly are the rules, and what the ranking system is going to do as well.

I have to go now, but I will try to think of more ideas and specifics later. Hopefully other people have ideas as well.
Top

Its a very intriguing subject. I agree with Rep 100% word for word.

RepSharpshooter wrote:Like you said, restricting certain areas is a possibility

Reminds me of Jak 2, and countless other games. Not that its bad.
----

IMHO, I don't think its worth it. But that's just me. Plus, what kind of songs do you have in mind?
----
Ok, down to real business:

True, they could be. But how many people with a DMI lot are planning on having a vehicle of their own? I've seen a couple already in the Showcase Thread. Like you said: incentive: "Why go around doing miniquests to unlock a vehicle when I can drop one of my own into my lot?" You'd have to a) tell everyone not to put in a vehicle, and tell them to do miniquests to unlock one, or b) "let them eat cake," in which case you'd have to drop your vehicle miniquests. Remember:

RepSharpshooter wrote:We can just spawn 32 cars out of thin air with no cost.

In whose possession those cars spawn is the question.
----

RepSharpshooter wrote:good people who follow the rules... how the policing is going to work, what exactly are the rules... etc.

I don't think there is any other way around this: you'll need a human moderator to act as the policeman. Setting up jail time for or taking away points / ranks from someone when team-killing takes place is easy enough, but there are different crimes. For example, when you respawn you "die" to go back to the spawn screen. This could also be called on as suicide, thus team-killing. Who knows, maybe he hit the wrong button when he paused. Or someone is being a smart aleck by bumping into people multiple times, whatever. You need someone who can interpret the crime and make a decision, sometimes on truthiness alone (need I say this person be trustworthy?). Hzll, we might even need an entire jury

RepSharpshooter wrote:CA will give you exp and gp even if you do very little on the battlefield, meaning even the lousiest players can rank up if they just play a lot.

Maybe a function of the policeman will be to decide who's worthy of leveling up.

These are just some of my thoughts. Not to discourage, because I would love to see the ideas in here work. I'll see if I can think of anything to help.
Top

@cars - it doesn't matter who's. The fact that we can create dozens and dozens of vehicles with no cost means that we don't have limited resources that we have to restrict to certain people. Restriction would only be used as incentive for doing something else (that we don't know of yet). Like in CA sure they could give everyone the best weapons because it's just a video game. The fact that the restrict the best weapons for more experienced players gives people incentive to keep playing the game.

@Police - it was a thought in the back of my mind that the jedi were going to be the police characters. Seemed fitting. Perhaps we could establish a few police members, some rules, then try to enforce it. To try to create an ingame policing system may be quite redundant though, considering it would be easier to just kick people off the server for behavior. Nevertheless, there needs to be SOMETHING to do, some goal, something to work towards, and this is an intriguing concept.

While we're on the subject, what WOULD be interesting would be some sort of struggle within the city. Either outlaws vs police, or red faction vs blue faction. It would be fun to control certain parts of the city, and protect your building from attack with your friends. But this may just be an interesting thought rather than an executable plan (keep in mind many of the ideas proposed could potentially be impractical although they sound cool). There's always so many unpredictable variables that occur in reality and not theory.
Top

RepSharpshooter wrote:it would be easier to just kick people off the server

Oh, why didn't I remember that?

There are Admin controls, duh. I haven't been on MP for a while.

Different mode, perhaps? It would be kind of confusing trying to capture buildings and having miniquests available at the same time.
Top Perhaps we have designated volunteered plots to be "war zone" areas that encourage violence. If you capture a war zone plot, you could get benifits from that plot, such as special ai soldiers to help fight with you.
Top

i have a idea although i do not know if it is possible. The reinforcement count could be used as
your XP and Gp. For instance your blue count could be GP, and Red be XP.
If you want to give people money/buy something you could type in a command in multiplayer if RDH Zerted could possibly make them which would give the amount of money from your reinforcements to another player. For instance if you typed /admin /givemoney (amount of money given) it could be given to another player. Of course this system would have to be different for every player. And when you kill you can get something like 30 gp and 10 xp or whatever. It has happened - for instance if you use the Never ending map cheat on Fake Console it will make he scores go to -- but other players can't see that.. And it has been used on RPG maps, such as Operation Ferret Master.
Anyway I don't know if it's possible but that's an idea.
Also, for the hired/bought things you could use some sort of reinforcement antiboost (like in the campaigns but reversed) to make your blue reinforcements (money) go down. Also for the police idea MAYBE you could get make a password for people who want to be police ranks. Rep could choose about 20 people and give them the password who he trusts so they can be police rank with inforced weps and stuff. Just some ideas anyway not sure if a password-unlocked-rank is possible anyway. Probrably not.
Top

Sorry for the year long bump, but i have a new idea for money/points to be used in the DMI. I'm in the middle of making a warehouse style paintball arena which is a replica of the halo map Hang 'Em High. You could make it so that you get points/money based on your kills/deaths. This can then be used to by armour/weapon/health/ammo upgrades for your guy. This would be a good way of earning/using money in the map.

Here is a pic of the stock map:
Hidden/Spoiler: 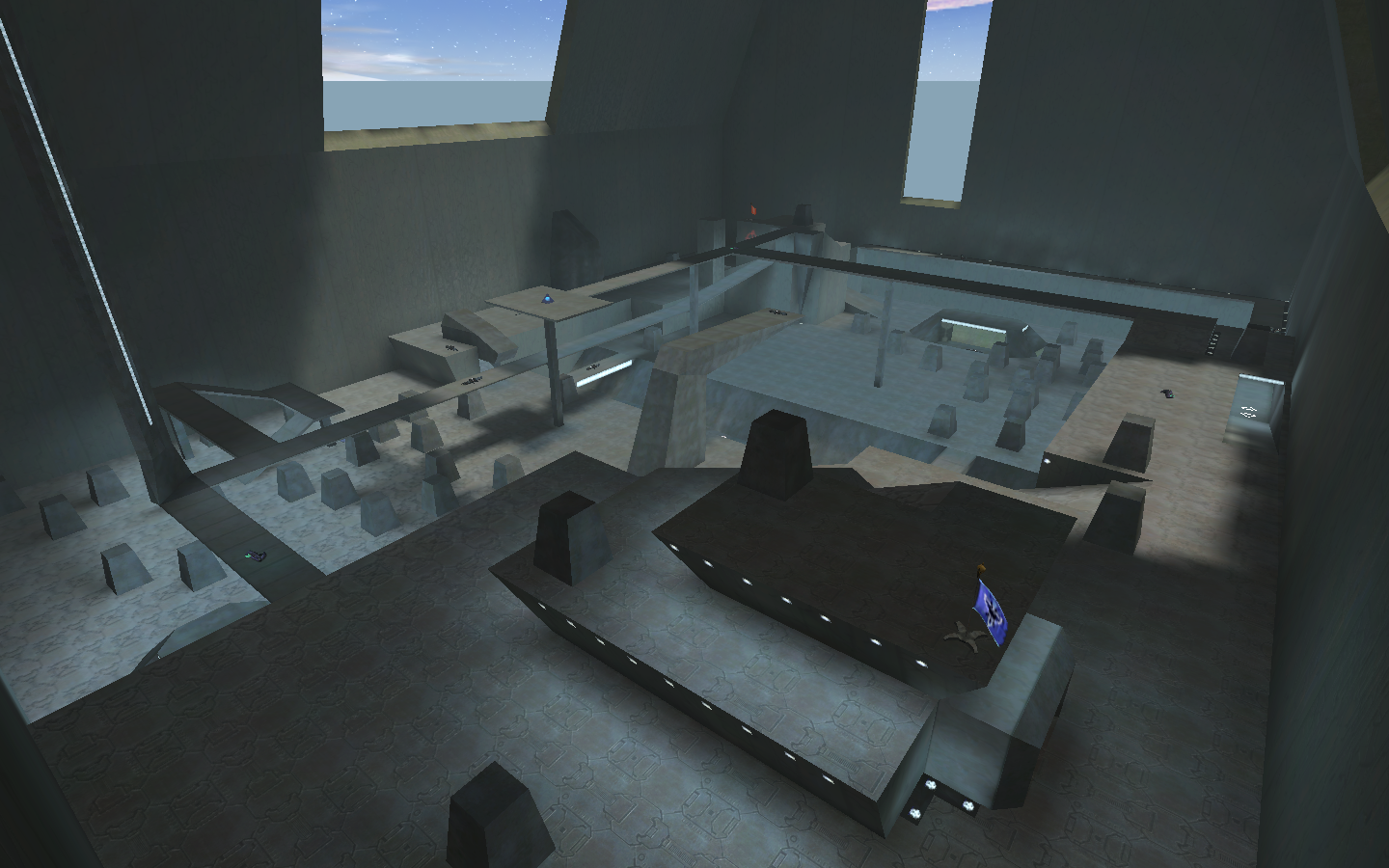 Nice idea but I think somewhere Rep said that he just wants to get the lots and sides into the map and release. He's been working on for like two years now so I don't blame him.

sim-al2 wrote:Nice idea but I think somewhere Rep said that he just wants to get the lots and sides into the map and release. He's been working on for like two years now so I don't blame him.

Exactly. I'd love to do cool things but simply there's no time or motivation.