Share videos, pictures, art, and other forms of media!

Anybody else watching this show? If not, WHY?!? 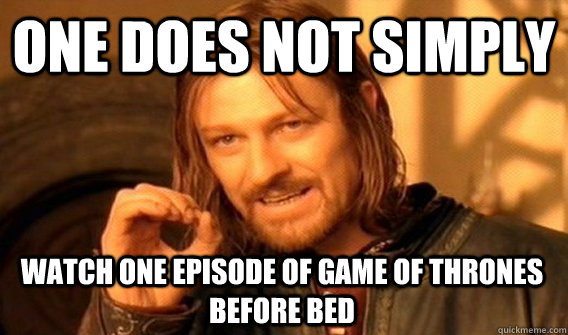 Well I dont i watched it once didnt liked it that much. Maybe it was because of the translation...
Top

Ah, understandable considering most lip dubs are awful. Why not watch it with English audio and German subtitles?

where can i do so? and i watch most films in english withlut any subtitles because my teacher always says that this is the best way to learn english perfectly

Ummmm, Amazon Instant Video might have German subtitles for the series - not sure, would have to check.
Top

well thanks i do that

by the way do you know californication?
Top

LOL, yeah, I know that show, mainly because I watched The X-Files, which starred David Duchovney and Gillian Anderson - but I don't watch the show for whatever reason, or at least not yet I don't. :q
Top

The show is terrific and I'm currently starting the book series.

I think each season gets progressively better, so you're in for some great stuff.
Top

The books are much better than the show, honestly. Ive read all the books and loved the show. The books just have more character detail and I love the writing style. My advice for anyone just starting with this series is to start with the books.

Also I play a GoT mod for Mount & Blade: Warband, its loads of fun.
http://www.moddb.com/mods/a-clash-of-kings

Edit: The mod will have lots of spoilers, don't play it until you've read the books.
Top

The Red Wedding changed that.

Hidden/Spoiler:
Which direwolf was that? I know it wasn't Ghost, Summer, or Nymeria. Was it Grey Wind?

Anyway, yeah, I started listening to A Song of Ice and Fire the other day - I'm about 12 hours in out of 33, very good stuff. (The narrator makes Tyrion sound like an old man - LOL)
Top

I love the show. You know, I'm spanish, but I like to watch it in english, it's better than the spanish voices.
I'm waiting for the season four, I want to see something I wanted to see when the first season finished.

The Red Wedding... I have no words when I saw it... I knew it was going to happen, because a friend spoiled me

he always do it to bother people, but I couldn't imagine the scene.
Did you see the reactions of the people?
http://www.youtube.com/watch?v=xmWCqrMd ... r_embedded

You can see who readed the books and who didn't and they reactions, lol.

Marth, about your question.
Hidden/Spoiler:
It was Robb's direwolf, Grey Wind.
Top

So who are your favorite characters?
I love all the Lannisters myself. I'm definitely a lion. Jaime, Joffery, Tywin, Tyrion, are just amazing. I couldn't care less for Cersei though. I'm so glad the Starks are gone. To me, it just seemed like they didn't belong in Westeros. They were the only noble family that put honor first before everything else, but it still ended up being their downfall. Ned, putting honor before his own life and his family, and Robb TRIED to be honorable, but he was only a boy. Robb was only 14 in the books, he couldn't fill his fathers shoes. He ended up dishonoring his vows and he paid for it. If only he didn't betray the Freys..
Hidden/Spoiler:

To the young wolf
Did you guys anticipate the red wedding at all? Or did it totally catch you off guard when it happened?
Top

Favorite characters would certainly have to be Tyrion, Daenerys, Bran, Arya, and Jon Snow. I've come to like Jaime, though, as well.

I hate the Lannisters, I hate them with a passion; they're idiots, and it's entirely up to Tyrion to fix them. I can't wait for Daenerys to come and slaughter them all.

I hadn't anticipated the red wedding, not at all - I was completely shocked and mortified, and it only fueled my hate for the Lannisters further.
Top

I don't really like daenarys, shes so overrated. Brans story line has been kinda boring after season 1, but he will get more excitement in the next seasons. Arya's one of my favorite characters, shes just so awsome. I love seeing the dynamic duo of her and Sandor, (another favorite.) Jon seems pretty dumb, I mean he actually thought the wall was an admirable brotherhood. But in the next seasons he does some important stuff. How could you hate Tywin?

You didn't see how the Starks were losing momentum? It seemed pretty obvious The Young Wolfs days were numbered. They even added multiple hints throughout the third season. The Starks made three critical mistakes that lost them the war: Losing Jaime, Marrying the other woman (breaking the vow to the Freys), and leaving Edmure Tully in charge of ANYTHING.

Which of the remaining kings do you stand behind? I suppose you'll say Daenarys.. Even though she was born out of incest. Joffery was born of incest and it made him lose claim to the throne. So strictly speaking, Daenarys has no claim. Although that didn't stop Aegon from conquering

BTW, did you see this deleted scene? http://www.youtube.com/watch?v=lMXJlUIQP94
Top

I love Daenerys because of the things she does: buying 8,000 badass slave-soldiers only to free them and allow them to stay as her soldiers if they want, killing the dude guy who horrifically trained said slave-soldiers, conquering a city only to free its 200,000 slaves, simply having dragons, etc.

I don't really hate Tywin, I just dislike him for being such a **** to Tyrion.

I love the Starks regardless of their misfortune and poor planning - they're just...the "good guys" in my head.

re: your question, Heh, definitely Daenerys or Tyrion (if he'd be "eligible"). Or maybe Daenerys marries Tyrion and they rule the land as the most hilarious couple ever. Mother of Dragons and Dwarf? Priceless.
Top

My favourite characters are Ned Stark, Arya (my favourite), Jon Snow, Tyrion, Daenerys, Sir Jorah, Stannis Baratheon, Gendry, and Jaime Lannister only in Season 3.
I hate the Lannisters and Viserys. But the one most hatred by me, is Joffrey... He is... Dah... I don't have words to say how much I hate him xD.

About Daenerys, I loved this scene:

Hidden/Spoiler:
When she gives her dragon to "the master", and the dragon doesn't stop flying. He started to be nervous while the dragon is flying and Daenerys is talking to the slave soldiers, and then she say: "Dracarys". So epic. http://www.youtube.com/watch?v=IU2bIzsJ8LE
Top

Ohhh, man, I LOVED that scene - so freaking perfect.

I almost forgot this thread existed. Marth showed me the entire series, and the Red Wedding made me hate it all for about 2 hours. Then I read about the epilogue in A Storm of Swords and my faith in Martin as a writer was restored. Since then I've kept myself up to date on the basics from the books and basically I'm REALLY excited for Season 4. Which is like almost half of A Storm of Swords before it gets to A Feast for Crows. Which is good if they don't do one book a season, because it cuts out too much and Martin writes too slow.

I share most of Marth's opinions. I want Daenerys on the Iron Throne. Yes Joffery and her were both products of incest, but his issues were always evident. Being a child of incest is no guarantee of a broken mind. The thing about Daenerys is she's the only one who cares about the people enough to make her a good ruler. Robert didn't care, Joffery didn't care, Cersei (though not directly on the throne) didn't care or she did and was just a complete freaking idiot. Well, the later isn't up for debate, I can't want to see her hit rock bottom.

Hidden/Spoiler:
I've read the books, but I thought Joffrey didn't die until a bit later.

Whatever though, 'twas still incredible and incredibly satisfying.

Hidden/Spoiler:
I've read the books, but I thought Joffrey didn't die until a bit later.

Whatever though, 'twas still incredible and incredibly satisfying.

I haven't gotten that far in the books but I was basically able to deduce what was going to happen in this episode because of the hype and some casting changes.

Hidden/Spoiler:
Perfect ending to Joffrey, but I'm a bit sad to see him go because he's the character you love to hate. There is certainly going to be a void without him. Also, Jack Gleeson played the part phenomenally -- he's a talented actor and it's too bad that he's going to retire after this.
Top
Post a reply
24 posts • Page 1 of 2 • 1, 2