Thanks for the suggestions spectreseven1138 , I will fix a lot of the things wrong and probably reduce the unit count by a pinch although I know i said earlier I would keep it !

@SupremeLeaderSnoke - of course you can have an alpha !

@Huscarl - OHH yeah those are what i programmed the clones to defend I will probably take away those icons - if you use free cam to look under ground there you will see that they are kashyyyk pipes - I'm used to making those defending points -
ion disruptions will be added as one shot turrets - taking down massive health to the MTT !
Top

Lorul1 wrote:if you use free cam to look under ground there you will see that they are kashyyyk pipes - I'm used to making those defending points

Invisible CPs would be a better option to use. And don't forget to use fortification nodes!
Top

When will the Public Alpha be coming out? And were there Starfighters in the Closed Alpha?
Top

Reapeageddon wrote:When will the Public Alpha be coming out? And were there Starfighters in the Closed Alpha?

Yup they'll be in the open alpha. As for a date when the public alpha will be ... ummm I'll say a week to two weeks ! I want it it be bigger and better than the closed alpha ! spectreseven1138 has made me some custom crates I can use to fill up the beach which is such a big help , and I can't wait to show you all (:

Ohhh and I really like your suggestion AQT . I completely forgot about those fortification nodes ! That will also be really helpful for crait as well. after the kashyyyk alpha comes out, crait won't be far behind ! And Mos Eisly is looking really good right now as well.
Pictures coming soon
Top

I keep forgeting to ask this but are u going to give the heavy droids the proper heavy gun instead of the first order one? It's not that I hate the model (it's fantastic, great work

) but I'm wondering if u gonna put the appropriate gun since u did for the heavy clone trooper. 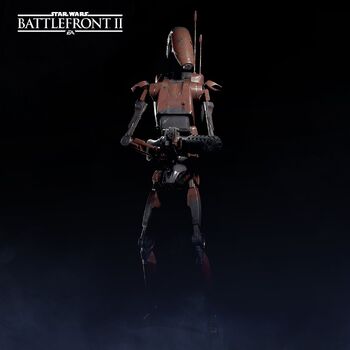 Next things.
The Venator looks amazing! Only issue with it is that when I go that far I can walk through it. I guess it's not a solid object.
The Droid Heavy's gun should be replaced with the proper model like Huscarl said, but the current one is still pretty good.
Top

Hey it was a long time since i discovered your mod (no it was since AOT release 0.5 alpha), i just register so i can't send you a private message :/ is there an other way to have the kashyyk map alpha ?
Top

Lorul1, whre can I download the closed alpha? I really want to try the map!
Top

Ooh gotta add those collisions thanks for the heads up reapeadeddon - and yeeeaaah ... from what I've gathered you guys are pretty split on having same era weapons ! But I think I'll change it so that they have there proper weapons - i got my point accross and over 80 thousand people who watched kyro play my map know it soooo yea !

Oh and X-ray, doomaster - welcome to gametoast. Check your inboxes for an alpha ! And just to make it clear you guys are on the list to receive all my alphas for the BF2EA conversion project so be sure to stop by and see how we're doing every once and a while. Crait and Mos Eisly will be soon (:
Top

Hey again Lorul, a few things. One, are you going to add the Republic Y-Wing for your AOT map? I can't find it anywhere. Two, have you made a Mos Eisley page on Gametoast, moddb, or anything similar yet? Can't seem to find it. And 3, any update on the release dates of the next AOT release or Kashyyyk map?
Thanks for taking the time to read this.

Ywing is on its way, Mos Eisly will NOT have its own page because I've already made THREE WIP threads and I don't want to hog up the WIP page - instead I will be making one big thread which will include ALL discussions of everything related to the "battlefront 2 EA conversion project" (which at the time of its creation will include discussions sourounding theed, mos eisly, kashyyyk, crait, jakku, and hoth).
And to answer your final question : AOT will have an update , but I'm not sure when it will be because Sereja has yet to release his assets and I wanna get my hands on those before I move on. As for kashyyyk ... yeah I've been pretty lazy lol , but that updated public alpha is coming in about a week or two everyone !
Top

Lorul, will you be making the interior of the venetor? It would look sickkkkkkk! Also , in the public alpha , will the day-night mode be included?
Top

doomaster14, this is a summary of what he said in the closed alpha message
- lighting changes
- Republic cruiser interior will be added
- Republic crates made lorul1 himself
- Phases 2 and 3 of the battle
- clipping issue with trees
- proper chunks for droid heavy
- The juggernaut turbo tanks weapon systems will be improved
- less crashes
- republic long range artillery will be added
- star fighters will be added
- Easter egg will be added

EDIT
Also I think lorul has said he will make a system for day and night. If i remember correctly 70% chance of day, 30% chance of night

Hi, lorul1, can I test Kashyyyk closed alpha? It's looks amazing. I have EA Battlefront 2 too, but is lack of content

Huscarl wrote:Actually, why not make it 50/50

This will be pretty generic!

@Asimardan - check your mailbox for an alpha (:

@Huscarl and doommaster14 - perhaps it will be generic but I will give it a try and see how 50 v 50 works as well as other unit counts slightly lower then the unit counts I've had in the closed alpha.

And just a reminder all my conversion maps will EVENTUALLY (not in alphas) have a classic conquest mode for all of you who don't like the over the top battles and the over the shoulder view ! It will use the new character models but the weapons, gameplay, and heros and unit count will play just like the old battlefront 2's conquest mode.

I've been not as active recently because I'm hard at work on getting this map ready for the public alpha but upon release I want to also introduce my coversion project ... or whatever it will be called - so I'm also hard at work getting pictures of jakku, hoth, and Mos Eisly which are all so much fun already.
Top

looking forward for everything to come together

Remember how you were asking for names for the Conversion Project?
I thought of one that could be better but it could work for now.